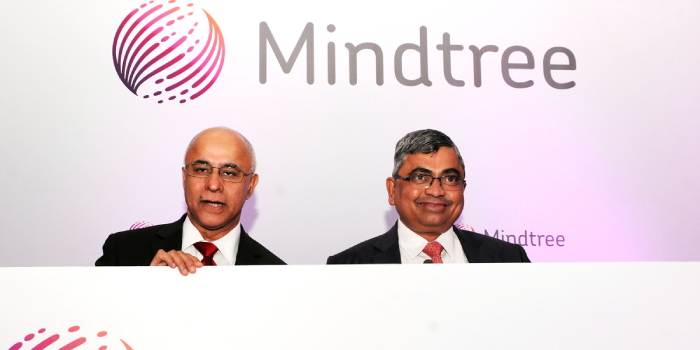 Larsen & Toubro (L&T) might merge its tech arms — Mindtree and L&T Infotech — into a $22 billion firm, Bloomberg has reported. The deal is expected to be signed next week.
CNBC-TV18 has reached out to L&T and Mindtree and is yet to hear from them. After the news broke, shares of L&T Infotech were trading at Rs 5,838.55 , down 3.12 percent at around 02:45 pm on BSE, and shares of Mindtree were trading at Rs 3,950.70, down 3.57 percent. Mindtree hit a low of Rs 3,844 at 12.40 pm. L&T Infotech hit a low of Rs 5,810 at 1.40 pm.
What could change?
The merger, if it happens, will result in cost synergies for both the companies as admin costs like HR would come down. It is to be seen who will lead this merged entity — Mindtree CEO and Managing Director Debashis Chatterjee or L&T Infotech CEO and Managing Director Sanjay Jalona.
The Bloomberg report says the firms’ boards could consider share swap ratios for the merger as early as next week. Separately, Mindtree and L&T Infotech would be conducting board meetings to report their earnings on April 18 and 19, respectively.
First hostile takeover of Indian software firm
L&T made a hostile takeover of Mindtree in 2019–the first such of an Indian software firm. The conglomerate holds about a 61 percent stake in the company, which has a market value of $8.3 billion and has around 74 percent of L&T Infotech, which has a market capitalisation of $13.6 billion.
L&T Infotech has a greater presence in the BFSI (banking, financial services and insurance) vertical. The BFSI contributes 32.8 percent to the L&T Infotech revenues whereas 17.5 percent of Mindtree’s revenue comes from BFSI, with a greater focus on insurance. Mindtree, however, has a larger presence in the media, communication and retail sectors.
In FY21, the revenue of Mindtree was $1.07 billion and L&T Infotech was $1.67 billion. Both the companies witness a dollar revenue growth of 30.2 percent and 25.3 percent, respectively. The FY23e PE for Mindtree is 88 percent and for L&T Infotech is 44 percent.
The background
When L&T took control of Mindtree, the previous management had tried to thwart the deal, calling the takeover “value destructive”. Promoters NS Parthasarathy, Rostow Ravanan, and Krishnakumar Natarajan unconditionally opposed the takeover bid. These Mindtree co-founders quit after L&T bought the controlling stake.
At the time, L&T had said Mindtree would be run as a separate entity, distinct from L&T Infotech and L&T Technology Services. It remains to be seen how employees and shareholders of Mindtree would take the news of L&T mulling a merger of its tech arms.
The Mindtree deal started when L&T bought 20.32 percent shares in Mindtree from Cafe Coffee Day founder VG Siddhartha in March 2019. It also made on-market purchase of around 15 percent capital shares. In June 2019, L&T made an open offer for an additional 31 percent stakes.
Change of plans?
In July 2019, a regulatory filing from Mindtree said: “We wish to inform that L&T has acquired equity shares to an extent 60.06 per cent of the total shareholding of the company and has acquired control and is categorised as promoter according to Sebi Regulations, 2018.”
At the time, L&T CEO SN Subrahmanyan had said: “Mindtree will be run as a separate entity, distinct from L&T Infotech and L&T Technology Services. The entities would run at an arm’s length. It is inappropriate to speculate about the future structure now.”
TagsInfotech L&T Mindtree